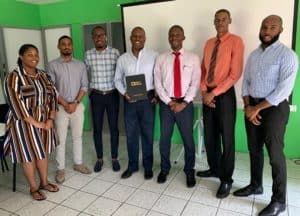 Members of iCreate Limited (ICREATE) and the Regulatory and Market Oversight Division(RMOD) took the time out for a photograph following a JSE’s Rules Orientation Session conducted by the RMOD team .

The session was held on Wednesday March 20, 2019 at ICREATE.